The day it rained in Dublin

Over the weekend, it rained and rained and rained in my hometown. At one point, yesterday evening, a month’s worth fell in just under six hours. The resulting floods were pretty spectacular. Some of my friends were in Dundrum Shopping Centre where veritable Titanic-like scenes were recored on various cameras:

Aberdeen hasn’t had quite such an exciting time weather-wise however, it would seem the wind has picked up a little bit…

The hilarity of being Irish

The above facebook status tickled me rather a lot. Being Irish in the United Kingdom is a daily lesson is how to be treated like a cartoon leprechaun (my lecturer once greeted me with a cheerful ‘top o’ the morning to ya!’). Irish culture in general though, is a subject laced with opportunity for piss-taking – illustrated by one of my earlier posts.

Dara O’Briain (my favourite Irish comedian) tackles this superbly when dealing with the spiky issues of the Troubles and the still-apparent, though very mild, divides between the southern Irish Catholic and Protestant communities. I particularly enjoy his treatment of the subject of ‘mixed marriages’ between Catholics and Protestants, since I am the product of one myself. The differences are so minute, yet they can tend to be made a rather big deal of in Ireland. Enjoy!

My pal Zeno hadn’t seen this yet, so I promised I’d put it up on my blog. Some of the language is crude, but the idea is original and very funny.

This photo sums up a debate that is absolutely massive in America and a bit of a non-starter in Europe. I went to a French Lycee for primary school. It was a secular atmosphere (in adherence with France’s severe views on the separation of Church and State) but even so, I don’t think I remember once being taught about where we come from.

I don’t have much of an opinion on the issue (who cares?), but the lack of critical thinking and sheer smugness of these people is more than a little irritating.

In other news: have you ever remembered a picture or painting but not known its title, then spent hours and hours trying to find it on the web to no avail? It’s happened to me a couple of times whilst researching for this blog and it’s absolutely rip-your-hair-out frustrating. Fear not! Google have saved the day:

Imagine how much fun it would be to work for these people. They got to spend a day doing arts and crafts as part of their job and got paid for it. I’m even more envious of the people involved in this advert for Google Chrome.

Pretty cool, huh? Here’s how they made it, it’s a lot more complicated than it looks:

As a fan of word play, this had me Beirut-ed to the spot.

… is not helped by photos such as these appearing on one’s facebook feed:

I’m not one to bask in the glory of an achievement (pause for laughter from the audience) but it is indeed nice to see messages like these: 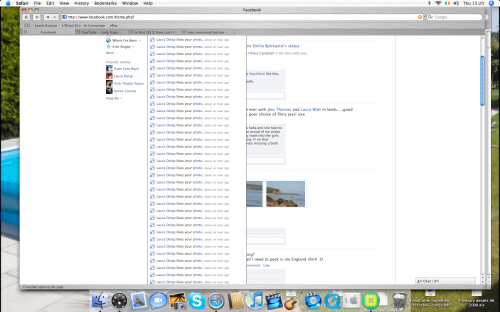 Okay, maybe I just fraped her.

Check out what happened when she finally regained control of her account:

This is the sight that greeted me this afternoon when I had just finished my final exam of the year and logged on to facebook. James Cooney = some man for one man.

And that’s it! I’m finished for the summer and ahead of me lies a season of sun, sand, mountains and trekking as well as an AMAZING internship with the Childreach International charity at  their East African offices in Moshi, Tanzania.

I’m hopefully going to get hold of a camera before I set off round the world, so as to be able to fill you all in on the incredible sights I see.

Next up though, is a hardcore session of bag-packing and flat-cleaning/moving. Then a night of heavy celebration with a ceilidh at the Blue Lamp and probably on to Warehouse to wage war on the liver.

And tomorrow, we hit Argyll with Rowly for a weekend of chillaxation in Kintyre.